Optimizing the lives of those affected

by organ transplantation and heatstroke illness 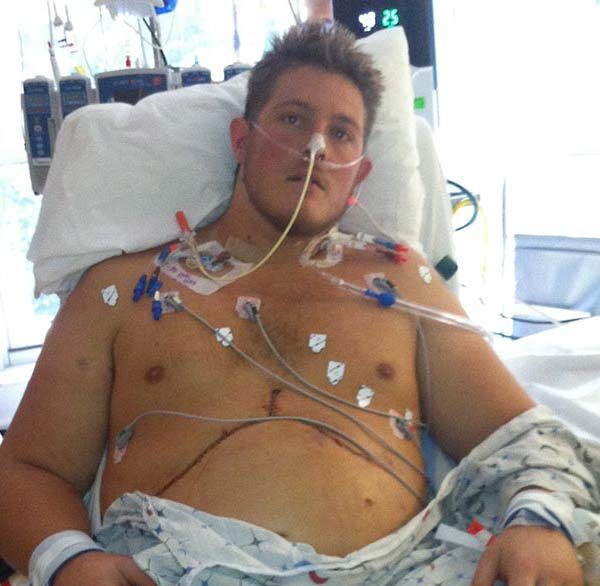 On August 12, 2013, Gavin Class suffered an exertional heat stroke during football practice at Towson University. His body temperature reached an estimated 111 degrees. Upon arrival at the hospital, Gavin was in a coma with significant organ failure. He was then transferred to The University of Maryland Medical Center Shock Trauma, where his heart stopped and he needed to be resuscitated. The doctors told his family “he is as close to dying without being dead.” After being stabilized, it was determined that he was in need of a liver transplant. He was put on a new MARS (Molecular Adsorbent Recirculating System) machine. A state-of-the-art rescue device for patients with hepatic failure.

Gavin’s life was saved through a liver transplant. He needed to re-learn how to walk, talk and perform the basic functions that many take for granted on a daily basis. During Gavin’s intense rehabilitation he resolved not only to resume his life but to improve his life. With the help of his family and friends, his medical team, a deep spirituality, and a commitment to his physical well-being, Gavin realized he could live twice, YOLT.

Gavin is currently a strength and conditioning coach. He works with middle school, high school, college, and professional athletes. With the experiences he has been through, his goals have grown beyond what he ever imagined. The YOLT ( You Only Live Twice ) Foundation has been created by Gavin to assist recipients of organ transplants and to bring heatstroke awareness to the broader community.

YOLT (YOU ONLY LIVE TWICE) is a registered 501(c)(3) non-profit charitable organization. Founded by Jonny, Danielle, and Gavin Class in 2017. We support transplant patients, their families, and heatstroke survivors through awareness, outreach, creating funds, and programs of health, wellness, fitness, and sharing Gavin’s story of resilience. Our hope is to help the transplant community and heatstroke survivors in building their strongest physical, mental, and spiritual selves when given the opportunity to live twice.

In partnership with Donate Life Maryland Team Maryland, YOLT sends one veteran, one adolescent, and their family to the Transplant Games of America. Teams from nearly 50 states compete in 20 Olympic-style events and over 60 special events for all who attend and participate. We also support the Donate Life Family Fun Run and 5K held yearly, supporting community outreach, aftercare, and education.

We have teamed up with The University of Maryland Medical Center and Dr. Daniel Maluf, Director, of the Program, in transplantation, we have started the artificial intelligence program. Using technology, transplant recipients will be released sooner and be closely monitored at home. The aim is to decrease clinical visits, infections, and readmissions.

In 2020, Gavin and his wife Rachel opened a YOLT office in Denver, Colorado. Our purpose is to spread the importance of organ donation and raise awareness of heat stroke illness while optimizing the lives of those affected by organ transplantation and heat stroke illness. Our future plans include: working with UC Health, Donor Alliance, and many other organizations.  We are actively fundraising and reaching out to as many individuals and organizations as possible.

Educate the community in their understanding of prevention, recognition, treatment, and recovery of heatstroke illness.

Spreading awareness and the facts about organ donation and transplantation. One organ donor can save up to 8 lives and enhance up to 75 lives through tissue donation which includes: corneas, skin, heart valves, connective tissue, veins, and bones. There is no gift greater than the gift of life!

Recovering from organ transplantation and surviving a heat stroke can be very challenging. By providing the tools to help patients and survivors achieve their highest level of recovery and reach their optimal potential in creating a healthy second life. YOLT offers programs for healthy lifestyle changes, physical fitness, and mental and spiritual wellbeing.

YOLT has created funds for low-income patients and their families who lack the ability to afford lodging near hospitals during the transplant process. Many must travel great distances from their home to the hospital. The cost of travel, hotels, parking, and food is enormous.  Medical bills and time off work can also be a strain financially. This fund helps to relieve the families of stress during this time so they can support and care for their loved ones.